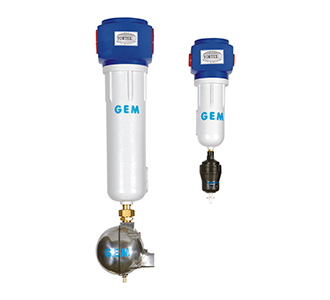 The moist air after entering the Vortex Separator hits the shell and then passes through the vortex generator, which generates the vortex motion of compressed air. The vortex generator is a fixed one and has a number of vanes. These vanes separate the moisture droplets by impingement separation method. Due to the density, the moisture droplets settle down into the dead zone below the arrestor. The moisture free air is let out through the inner shell of the separator. The arrestor will not allow the compressed air to carry the removed moisture. An automatic drain valve (float type) is fitted to the dead zone, which drains the moisture condensate. A sight glass is provided for visually checking the level of moisture collected in the dead zone.

* Product Design and specifications are subject to change due to constant upgradation.

New Idea & Solutions
for Your Work !